Cincinnati, Dayton Closing the Gap: Why the Push to Merge the MSAs is a Winning Strategy 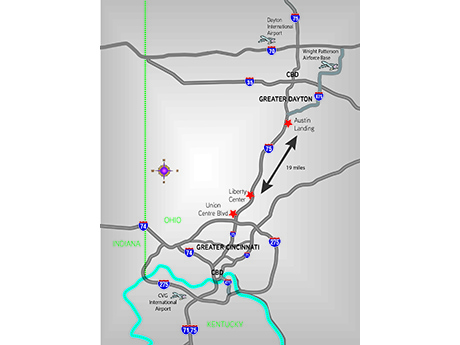 New developments continue to spur Cincinnati’s northern growth and Dayton’s southern growth along I-75.
The tale of two Ohio cities — Cincinnati and Dayton — is a story of growth. It takes less than an hour to travel between Cincinnati and Dayton. The two metros sit about 55 miles apart along Interstate 75, and that distance is slowly getting shorter. Since 2000, the cities have been growing together along the I-75 corridor, with significant growth over the past five years.
The northern suburbs of Cincinnati have experienced exponential growth over the last 20 years stemming from the development of Union Centre Boulevard in 2000 in West Chester Township. Now, West Chester is the second largest community in the Cincinnati metropolitan statistical area (MSA). Only the City of Cincinnati is larger.
Suburban growth is catalyst
New developments continue to spur Cincinnati’s northern growth along I-75. In 2015, Liberty Center, a mixed-use retail, office and housing development, opened in Liberty Township north of the fast-expanding West Chester. The development is another example of a growing trend to bring urban-style amenities, such as live, work and play environments to the suburbs.

Although much of the I-75 corridor is industrial, the growing suburbs led to the significant increase in the amount of office and retail space in the areas between Cincinnati and Dayton. Businesses located along the corridor can pull from both the Cincinnati and Dayton workforces and have easy access to major transportation networks.

Just as Cincinnati is expanding north, Dayton continues seeing immense growth in its southern submarkets. Like Union Centre Boulevard, the Austin Boulevard interchange opened in 2010 offering a large amount of land available for new development. Dayton built its own large, mixed-use development called Austin Landing, furthering the growth of nearby markets like Springboro and Centerville.

Although Dayton and Cincinnati proper may be a little over 50 miles apart, Austin Landing is just 19 miles from the new Liberty Center development. The development shows how the growth along the I-75 corridor is bringing the two metros closer each year.
It might not be long until the cities of Cincinnati and Dayton are combined in the eyes of the federal government. Although Cincinnati and Dayton are currently separate MSAs, trends suggest that the two MSAs may be combined in the near future, potentially the 2020 census.

The decision to combine two MSAs is up to the Office of Management and Budget and is based on a variety of factors such as population growth, development patterns, commuting populations, and social and economic exchange. Based on Cincinnati and Dayton’s current growth patterns, it appears to be only a matter of time before the two MSAs merge together.

The U.S. Department of Commerce already grouped Cincinnati and Dayton together when it granted the area the Southwestern Ohio & Northern Kentucky Aerospace Region (SOAR) designation due to the high concentration of aerospace industry in the area. Prominent examples include General Electric Aircraft Engines located in Cincinnati and Wright-Patterson Airforce Base in Dayton.

The designation, one of just 12 in the country, helps attract aerospace manufacturers and businesses to southwestern Ohio. With the aerospace industry leading to designations like SOAR and all of the mixed-use developments bringing the cities closer together, it is clear that industry is leading the MSAs toward a merger.

Cincinnati and Dayton would not be the first MSAs to combine. Other cities like Dallas-Fort Worth have blazed the trail for merging metros.
Benefits of combined MSA

A combined MSA would boost the Cincinnati-Dayton region into the top 20 largest metropolitan areas in the country. According to the 2015 estimates, Cincinnati’s MSA ranks 28th in the United States and boasts a population of nearly 2.2 million across 15 counties in Ohio, Kentucky and Indiana.

Dayton is smaller with a total estimated population of 800,909 in four counties. If the MSAs are combined, the area will reach a population of approximately 3 million and rank 19th in the country.

These statistics are important because they make the southwest Ohio region more attractive to companies looking to locate in a large city, especially if those companies want a more affordable area than metros like New York, Los Angeles or Chicago.

A larger workforce, access to more universities, and other benefits are key to winning larger bids and attracting more business to southwest Ohio. Heightened interest in the region will increase the volume and velocity of commercial real estate in the marketplace.
Momentum is contagious

In the past five years, downtown Cincinnati has undergone a massive renaissance that has gained national attention and boosted the demand for office, retail and multifamily properties in the city’s urban core. That momentum is spilling over into Northern Kentucky and other areas of greater Cincinnati.

While downtown Dayton is also moving in a positive direction, a combined Cincinnati-Dayton MSA may lend some of Cincinnati’s energy to Dayton’s urban areas to help accelerate the city’s positive momentum.

While nothing is set in stone, it appears to be only a matter of time before the Cincinnati and Dayton MSAs merge as the cities physically grow together. Until then, the people and businesses in the region will just have to watch the tale of these two cities unfold.